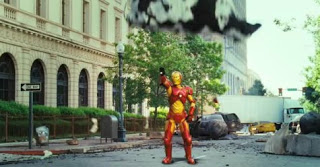 Since I usually talk about about trailers for films I want to see, I decided that today it would be fun to talk about the trailer for a film I am avoiding at all costs.

For those who don’t know, writer/directors Jason Friedberg and Aaron Seltzer are two of four guys credited along with the Wayans brothers for writing Scary Movie. They have since dedicated it amongst themselves to exploit that credit in order to write and produce their own series of “parody” films (FYI, the other two writers, Buddy Johnson and Phil Beauman, did the same thing by writing and producing Not Another Teen Movie in 2001, but haven’t really been heard from since).

The problem with Friedberg and Seltzer is that they don’t know how to properly do a spoof. What they end up putting in their films is just thinly veiled plagorism (i.e. they just recreate scenes from other movies in different contexts).

Also even though this is called Disaster Movie, a better title for this film might be Parody of Every Single Movie Since Meet The Spartans Came Out (and then some). Seriously, this film even includes parodies for films (such as Hancock) that weren’t even out yet when the trailer was first released about a month ago.

Alas, even though Friedberg and Seltzer set the bar for movie parodies pretty low (to the point that, the more appealing, Superhero Movie was all but ignored), their films are made cheap and make a profit, so we will probably have to suffer from their films for years to come.