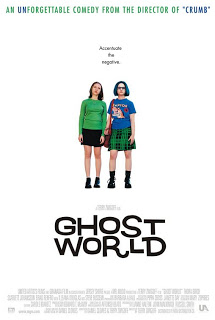 I recently revisited this film, which I enjoyed when in came out back in 2001.

Based on a graphic novel by Daniel Clowes, this film deals with two girls (played by Thora Birch and a pre-fame Scarlett Johansson) as they deal with life after graduating from High School.

The film also features a memorable supporting role by Steve Buscemi, where he plays a loser outcast, which in contrast to the types of role he is usually known for (i.e. Resovoir Dogs and Fargo).

It was also neat (in this rewatch) seeing a 17 year old Scarlett Johansson two years before she became famous with Lost in Translation. Despite the younger age, she seems pretty much the same in this film as she does now.

Ghost World is a memoriable nice little film and it is definitely worth checking out.