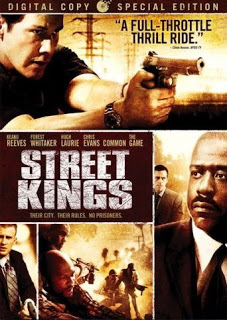 It’s a little late, but here are this week’s DVD picks.

My main pick for this week would be the Keanu Reeves-staring crime thriller Street Kings (also on Blu-Ray). I missed the film in theatres, though I wouldn’t mind checking it out.

Also coming out is Prom Night (also on Blu-Ray), which is being advertised (as most horror films these days) as an unrated release, so it would be interesting to see if this version is more worth watching than the PG-13 version that was released to theatres (or is it still as slasher film without the slashing).

The direct-to-DVD sequels just keep on coming. This week brings us The Scorpion King 2: Rise of a Warrior (also on Blu-Ray).

To round things off, you can now get Oliver Stone’s Nixon on Blu-Ray.