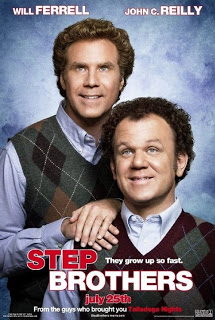 Earlier this year when I was talking about Semi-Pro, I stated that I thought Will Ferrel’s routine was getting old.

After seeing Step Brothers, I still have yet to be convinced otherwise.

Before I say anything else, I should state that I thought Step Brothers was an incredibly funny movie. However, it was also an incredibly stupid movie.

Ferrel did a similar “man-child” routine back in the 2003 film Elf. However, in this film, there seems to be no reason why he (and John C. Reilly) is a 40 year old man acting like a 10 year old.

However, I just wish Will Ferrell will start taking different kinds of roles.