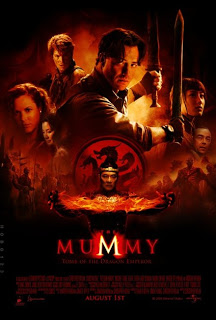 The biggest release in this first weekend of August is the third film of the Mummy series, Tomb of the Dragon Emperor. Rob Cohen takes over from Stephen Sommers (who’s still producing) and Maria Bello fills in for Rachel Weisz. Changes aside, it should still be a fun ride.

The only other films coming out this week is the electoral comedy Swing Vote with Kevin Costner and the horror film Midnight Meat Train.