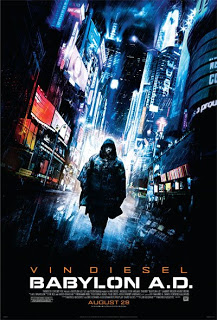 The final movie of the summer movie season is probably one that should be avoided.

The main film of the weekend is Babylon A.D., which was rated a measly 7% Fresh on Rotten Tomatoes.

Disaster Movie wasn’t screened for critics, but saved on the previews and the previous films by directors Jason Friedberg and Aaron Seltzer, I think that it would be safe to say the Disaster Movie is….well a disaster.

The best choice this week would be Traitor, which received a 51% Fresh rating or Hamlet 2, which is expanding with a rating of 60% Fresh.