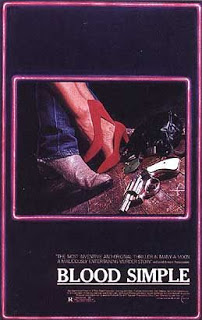 Since a new directors cut of this film was released this week, I thought I would take a look back at the Coen Brothers’ first film.

I saw this film shortly after seeing No Country for Old Men last year and I noticed that the openings of both films were essentially the same: Various static shots of Texas, accompanied by narration.

The film itself has a very simple story of a jealousy husband, who hires a private investigator to kill his wife and lover, but the investigator has plans of his own.

The film is a pretty good thriller, especially with its suspenseful and violent ended.

The film is also the film debut for Frances McDormand, who went on to marry Joel Coen and appear in many of the Coen’s future films, including their latest Burn After Reading.