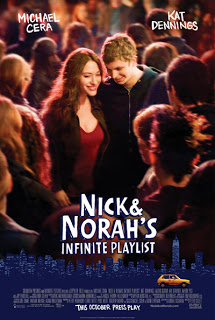 I find it quite a coincidence that I received an advance screening pass for this film today, while it is going to be shown at the Toronto Film Festival tomorrow.

I found I quite liked this film. All the events take place over an entire night, so it can be compared to films like Dazed and Confused (without the drugs) or even Superbad (also featuring Michael Cera).

I probably won’t say too much more (since the film does not come out in regular release for a month), so I will just end by saying that I recommend it.