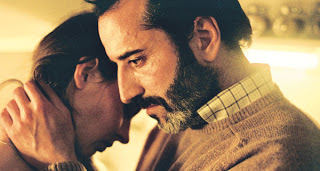 The most of those press screens was definitely that for the Belgium film Unspoken (pictured), which had not only the five assigned volunteers, but at least three representatives for the film, who gave out promotional materials and press kits.

As usually the case with my volunteer shifts, it was a celebrity-less affair. However, during my first press screening, I got a bit of a joy when Michael Phillips of the Chicago Tribute, aka the person, who had been filling in as Richard Roeper’s co-host on Ebert and Roeper, walked into the screenings.

I also noticed some sort of interview going on as I left to go home, but I couldn’t recognize the person being interviewed. Oh well.