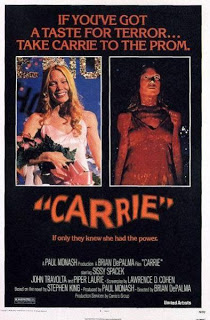 This week, for the final week of my horror-themed Classic Thoughts columns, I will be looking at two classic Stephen King adaptations with me doing Carrie today and The Shining tomorrow (both my first viewing). As such, there will be no Trailer Thoughts this week.

First is Carrie, which is an adaptation of Stephen King’s first novel (it’s also the very first such adaptation).

I can’t really call Carrie a straight horror film. It’s more of a drama that slowly builds up to the horror at the very end.

I actually found it a bit of a sad story about this shy and awkward girl, who suffers torment from her ultra-religious mother, and how she begins to try and fit in.

It has been well advertised how this turns out and it’s almost tragic.