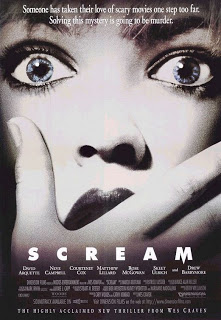 In the latest of the horror-themed Classic Thoughts columns, comes the film that helped reignite horror’s mainstream popularity during the mid-90s.

Scream works as both a satire of the cliches of horror films, while at the same time being a fairly decent horror film in of itself.

The plot also probably gives a lot of thanks to the original Halloween, which is even shown being watched by the characters at one point during the film.

The film lead to two sequels, which were not able to match the first (the second seemed too mainstream, while the third was affected by the Columbine shootings), however first can be considered a modern horror classic.