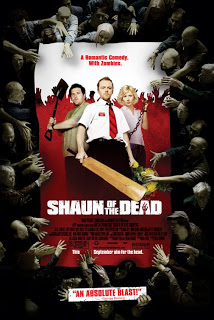 For the month of October, my classic thoughts column is going to be devoted to horror films. With the release of, the Simon Pegg starring, How to Lose Friends and Alienate People coming out this week, I thought I would start with the British horror/comedy that began Pegg’s current popularity.

Shaun of the Dead was advertised as a romantic comedy (with zombies). The film came out in North America about six months after Zack Snyder’s Dawn of the Dead remake, which probably helped it gain attention.

The film does a good job of mixing comedy and horror, with the film staring out as a laugh-out-loud comedy and slowly moving a more serious horror film towards the end.

The film was definitely a surprise hit and it helped Simon Pegg get recognition in North America.