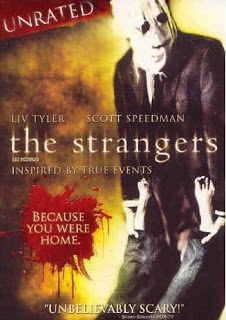 Just in time for Halloween comes The Strangers on DVD (which also, probably not-so-coincidentally, is released on the same day as The Incredible Hulk — which is also released by Universal and features Liv Tyler).

As what seems to be the norm with horror DVDs these day, this is advertised as the “unrated” edition.

Now watching the film, the only thing noticeably different for me was an extension to the ending. However, I doubt that this extension added anything that would have changed the film’s R rating and I believe that the unrated label was, once again, added as a marketing ploy.

As for the special features, there are two deleted scenes that aren’t too spectacular, as well a nine minute long making of featurette that was also not too spectacular (though I have to say that I was amused, though not that convinced, at the production designer trying to explain how this was a “terror film” instead of a “horror film” — I guess the H-word truly is frowned upon in mainstream cinema).

In the end, I have to say that The Strangers DVD is only a tad higher than a bareboned release. However, since the film is (still) my favourite horror film of the year, all I need is the film itself.