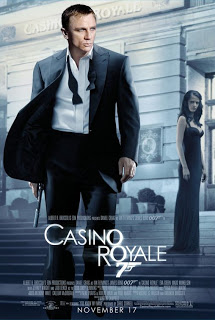 With Quantum of Solace coming out this weekend, I thought that I would take a look back at the last James Bond film.

When the role of James Bond switched from Peirce Brosnan to Daniel Craig, the producers decided to start fresh by making this an official adaptation of the very first James Bond novel (making it the first adaptation since 1987’s The Living Daylights).

The goal with this new James Bond was to add a bit more realism to the character, without any gadgets or too many campy one-liners.

At a running time of 2 hours and 24 minutes, this is one of the longest James Bond films. This could probably be attributed to how the first hour of the film contains action sequences not found in the novel.

This was probably done to calm fans of the more recent Bond films, especially since nearly the entire second act of the film is made up of a card game (which does add a more cerebral element to the Bond films).

In the end, Casino Royale was a good introduction of Daniel Craig’s Bond and I look forward to seeing how this Bond develops in Craig’s first original Bond story Quantum of Solace.