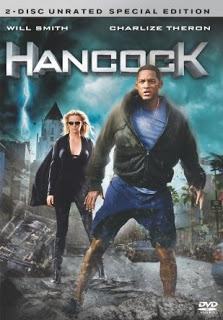 The big release this week is Hancock (also on Blu-Ray). As per my thoughts on the film, while I agree with most that the second half opens some plot holes, I still found it a decent film.

Just in time for the holidays (and a new Vince Vaughn holiday comedy opening tomorrow) is Fred Claus (also on Blu-Ray).

For more family entertainment, you can pick up the animated film Space Chimps (also on Blu-Ray).

Fans of Wes Anderson would probably enjoy the new Criterion edition of his first film Bottle Rocket. The film also comes out in Blu-Ray in a couple weeks.

This week’s Blu-Ray releases include The Kingdom and Jarhead.