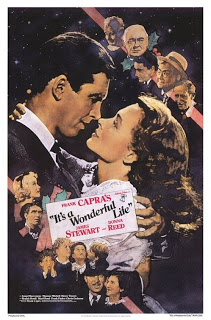 After seeing on TV for the first time, I couldn’t go to bed this Christmas Eve without saying a few words about It’s a Wonderful Life.

The film is now considered a holiday classic and it usually airs every Christmas Eve on some channel.

I knew the basic plot (about a down on his luck man, who wishes he never was born) before seeing the film, however the film doesn’t get to that part until the third act.

For the most part, the film tells the story of George Bailey (played by the wonderful James Stewart). George has high ambitions for life, but he always feels he is being held down by various events in his town.

The point of the film is George realizing that his small contributions to the town over the years has made him one of its most well-liked citizens and the film has one of the best feel-good endings I have ever seen.

The film was definitely a great way to spend my Christmas Eve and I look forward to seeing it again.