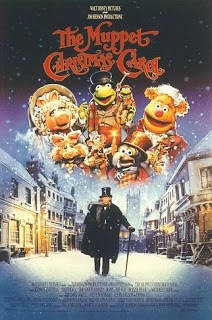 It would be fitting that I would end my holiday classic thoughts with an adaptation of Charles Dicken’s A Christmas Carol. There have been many adaptations of the story, including 1951’s Scrooge, staring Alastair Sim, which is probably the most beloved.

However, the version staring the Muppets is one that I’ve seen most often, since childhood (it’s hard to believe that the film is now 16 years old).

This film is also notable for being the first appearance of The Muppets, since the death of Jim Henson in 1990. The film was directed by Henson’s son Brian and Muppets voiced by Henson, such as Kermit the Frog, received new voice actors.

The film itself is a pretty decent adaptation of Dicken’s story, with The Muppets filling the major roles (including the Great Gonzo doing a humourous turn as Dickens himself). The human cast is lead by Michael Caine playing Scrooge.

I would like to see the other adaptations of A Christmas Carol one day, but The Muppets version really holds a special place in my heart.