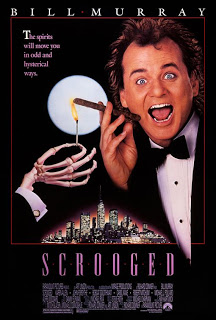 Bill Murray was at the top of his prime during the 1980s and early 1990s, and this modern take on A Christmas Carol ranks as one of my favourite Bill Murray films.

Murray plays a crooked TV executive, who decides to air a live broadcast of Dicken’s tale of Christmas Eve and he gets visited by the ghosts from the story.

Overall its a funny movie and it does a good job of following the basic plot of Dickens novel, while at the same time sticking to a story of it’s own.

Scrooged has become one of my favourite holiday films and it you haven’t seen it, you should check it out.