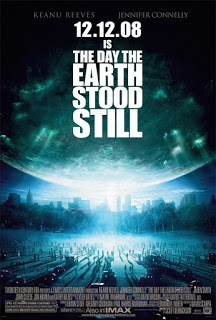 This week we have the release of the remake of the 1950s science fiction classic The Day the Earth Stood Still, which I am planning on seeing in IMAX. Since I haven’t seen the original (though I want to), I am able to see the film with an unbiased mind. The same probably can’t be said about the critics, since the film currently only has a 24% Fresh rating on Rotten Tomatoes.

Also opening is Doubt, which just received a few Golden Globe nominations. That film currently has a 71% Fresh rating.

Another fresh nominee opening this week is The Reader, which currently has a 57% Fresh rating.

If you want a holiday film to watch, you can check out Nothing Like the Holidays, which is notable for having an all Hispanic cast. The film has a 51% Fresh rating.

Finally, opening in limited release is Grand Torino, which has a 78% Fresh rating making it the best reviewed film of the week.