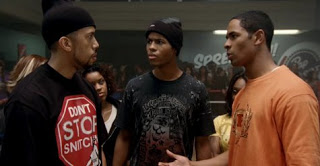 The Wayans Brothers are back to doing spoofs with this week’s trailer.

You can indirectly blame Aaron Seltzer & Jason Friedberg endless barrage of plotless spoof flicks on the success of the Wayans’ Scary Movie, which Seltzer and Friendberg co-wrote.

Nearly a decade later, the Wayans’ return to the genre (quick note: they are still credited as the Wayans Brothers, even though the film is the directorial debut for nephew Damien Wayans).

My first thoughts on the trailer is that, unlike the films Seltzer and Friendberg come out with, this film actually seems to have a story and trailer doesn’t doesn’t bog itself down by shoving the films it spoofs (the only ones I caught were spoofs for Save the Last Dance — the basis for the story, Flashdance, and those many hip-hop dance films, such as You Got Served, that come out).

I wouldn’t rush out to see the film, but at least the Wayans aren’t at Seltzer and Friendberg’s level.