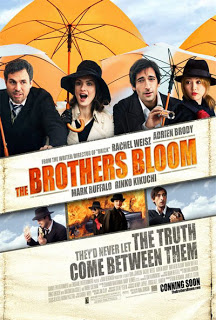 After over eight months of waiting, I finally got to check out the The Brothers Bloom.

Was it worth the wait? Yeah, I would say so. It’s a more lighter film than, director Rian Johnson’s previous film, Brick and I thought it was a fun little con film.

Most of the comedy in the film comes from great performances from Rachel Weist (as a very upbeat reclusive rich girl) and Rinko Kikuchi (who does so much without hardly saying a thing).

My only real complaint is that the film stretched on a little longer than I would have liked, but in the end I was definitely glad that I finally got to see the film.