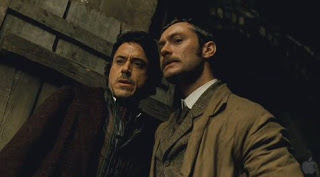 This week we look at the first trailer for Guy Ritchie’s take on Arther Conan Dolyle’s classic character.

The first thing that would be obvious in this trailer is that Guy Ritchie has made a more action-packed version of Sherlock Holmes than one would be used to.

That said, it looks like Robert Downey Jr looks to be a hoot as Holmes as Jude Law seem competent enough as Watson. What is currently unknown is if the film will follow the classic story structure of the tale being narrated by Watson.

Of the two Sherlock Holmes currently in production (the other being a comedic take staring Sacha Baron Cohen), this one looks to be the most intriguing and I will probably check it out when it opens this Christmas.