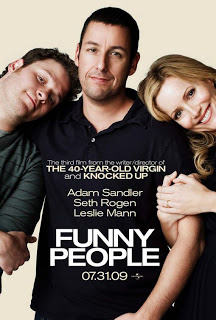 It would be unfair to compare this film to Judd Apatow’s previous directorial efforts, The 40-Year-Old Virgin and Knocked Up, since those were different types of movies.

Funny People is definitely a comedy-drama and even though there were scenes with plenty of laughs, there were also serious scenes within the film, and I thought that the film mixed the two genres well.

With most of Apatow’s regular supporting cast missing (except for Jonah Hill), the bulk of the film centers on Sandler’s and Rogen’s relationship.

I can’t say that the film is the funniest comedy of the year, but is still a pretty good film.