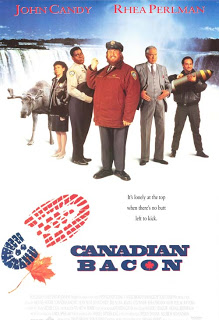 In his twenty year career, Michael Moore has been primarily known for directing documentaries.

However, it is now being reported that after the release of his upcoming documentary Capitalism: A Love Story, Moore is doing to take a break from the non-fiction world and move into feature films, with him having already been working on screenplays for both a comedy and a mystery.

This wouldn’t be the first time Moore ventured into features. In 1995, he directed the U.S. vs. Canada spoof Canadian Bacon, which was one of the final films to star the late John Candy.

Michael Moore’s documentaries have always leaned more towards entertainment than information, so I would think that features would be a natural direction for Moore to go and I will definitely be interested to see how they turn out.