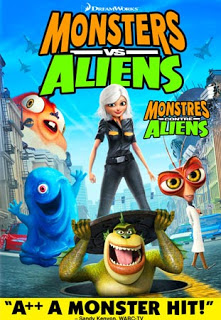 This week my main pick is Monsters vs Aliens (also on Blu-Ray). I thought that the film was a pretty good throwback to classic sci-fi films (though it’s a shame that the DVD version will not be in 3D – though you can get a deluxe version with a 3D short film).

Also new this week the Sam Mendes-directed comedy-drama Away We Go (also on Blu-Ray).

There are a lot of big Blu-Ray releases this week including The Wizard of Oz, Labyrinth, The Dark Crystal, Snakes on a Plane, and The Texas Chainsaw Massacre (2003).

And that’s my DVD Pick for this week.