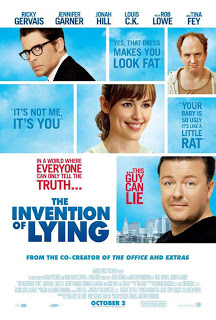 The Invention of Lying is Ricky Gervais’ second major staring role in North America, following last year’s Ghost Town.  I do have to say that this film better shows off Gervais’ talent as a comedian.

The comedy in the film comes from how the film takes place in a world where everyone tells the truth no matter what.  As such, when Gervais’ character learns how to lie, everyone around him will believe it no matter how outrageous it is.

The film is also full of cameos including Tina Fey, Jeffrey Tambor, Jason Bateman, and John Hodgeman.  As such, part of fun with watching this film is seeing who will show up next.

In the end, this was a funny comedy and I hope for more good things to come from Gervais.