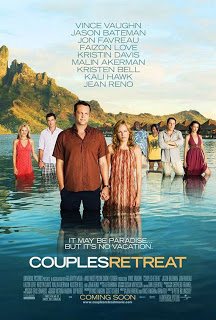 In the rare double feature for me as I saw the new Vince Vaughn comedy Couples Retreat followed by a midnight screening of the high-buzz low-budget horror film Paranormal Activity.  It was definitely a busy night.

Couples Retreat
Starting with The Break-Up, it really seems that Vince Vaughn has picked a lot of mainstream “safe” comedies and he has kept away from the R-rated comedies in which he is at his most funny.

The film was funny, however I would usually hope for more from Vince Vaughn.  It was an average film at best.


Paranormal Activity
Now this is the film I want to talk about it.

Usually one takes hype with a grain of salt, how this one was right on the money.

I have to say that Paranormal Activity is as terrifying as people say it is.  This is mostly because the film is so realistic.  The film uses the same “found footage” concept as The Blair Witch Project.  While I still like that film, this film was more successful and making me believe that there was actually a demonic entity in the house.

The film featured a building tension that was greatly executed and there were some supernatural events shown in the film that was so extravagant, that it’s hard to believe that it’s a special effect in the film.

The film is poised to open wide next week and I definitely recommend that you see it.