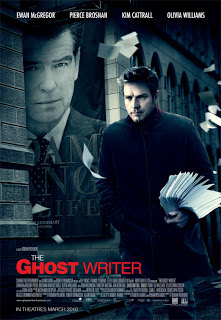 Last weekend was incredibly rainy and windy and frankly I was not in the mood to post any thoughts after I came back from seeing this film.

However, I thought I should go back and give my opinions, since I thought that this was a really decent mystery/thriller.

Ewan McGregor plays a nameless Ghost Writer, who is assigned to finish the memoir of the former British Prime Minister (played by Pierce Brosnan), after the mysterious death of his predecessor.  As the film progresses, a vast conspiracy is slowly unraveled.

It is a shame somewhat that director Roman Polanski’s legal troubles are overshadowing the film somewhat, since it’s nice little mystery film that I would recommend you check out.