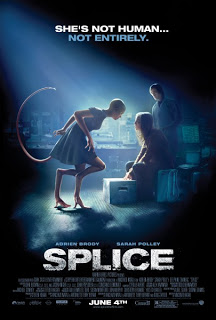 Well, I am back in Canada and for my first film back I decided to see what can already be considered a Canadian success story (by the fact that it is a rare example of a Canadian film with an American distributor).

Splice is a film by Vincenzo Natali, who is probably best known for Cube.  It is a science fiction film about a couple, who create a genetically engineered creature using human DNA.

The trailer marketed the film as a horror film.  However, even though there are elements of the genre within the film (mostly towards the end), the film is more a sci-fi drama about the repercussions of playing God.

I have to say that it was quite an intriguing film that sci-fi fans would love.