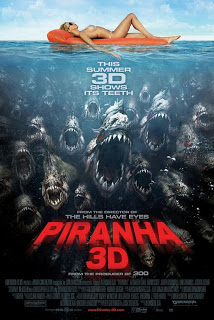 It’s been ages since there was a truly gimmicky 3D film was released.  Piranha 3D may not have perfect 3D effects, but it was 1000x better than the post-converted afterthoughts studios have been releasing since Avatar hit it big.

The film is pretty much what you except it to be: a fairly campy, really gory horror film.  I also love the many cameos in the film by the likes of Richard Dreyfus, Christopher Lloyd, and Eli Roth.

Piranha 3D may not win any awards, but it was a fun experience.