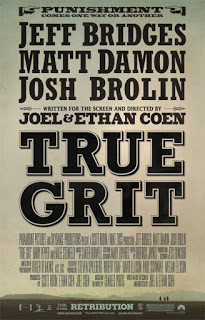 I’m not too familiar with the original 1969 film, other than the fact that it won John Wayne his only Oscar.  However, for this version, the Coen Brothers decided to use more to the original book, than the film, so this can be seen more as a readaptation than a remake.

The film is more a slow-burn western, with more talking than shooting.  However, it works thanks to the great performances within the film.  The highest praise goes to Hailee Steinfeld in the lead role, as teenage girl looking for revenge for her father’s murder.  Jeff Bridges steps into Wayne’s role of “Rooster” Coburn, who he plays as a gruff old man.  Rounding out the cast is Matt Damon as Texas ranger LaBeouf (or as he says “La Beef”) and Josh Brolin as Tom Chaney, the target of the manhunt.

While there aren’t too many gunfights in the film, it is still a gripping film that lives up to the meaning of the title (i.e. characters with determination).