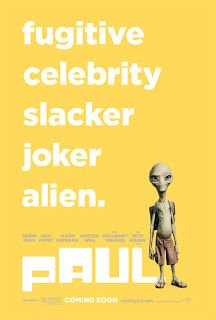 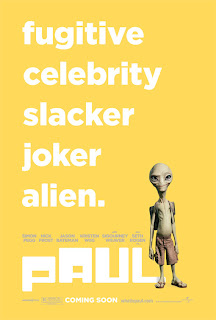 I’ve been a fan of Simon Pegg and Nick Frost since Shaun of the Dead, so I was happy to see them back together for Paul (even though they are without usual director Edgar Wright).

The film is a sci-fi comedy about two British geeks, who pick-up an alien named Paul (voiced by Seth Rogen) that escaped from Area-51.  While some parents may be fooled by Paul’s cartoonish appearance, this is NOT(!!!) a kids movie and Paul is one rude and foul-mouthed little alien (I put extra emphasis on the “not” after I overheard a mother telling her kids that the film was not what she expected it to be while I was leaving the theatre – some people just never pay attention to film ratings).

Either way, I thought that Paul was a pretty hilarious movie.  The film was also a very geeky film.  Not only does the film feature scenes at the San Diego Comic-Con (aka Geek Central), but there are also countless sci-fi in-jokes spread throughout the film (I’m not even sure I caught them all).

I would definitely recommend the film to geeks everywhere (non-geeks too).