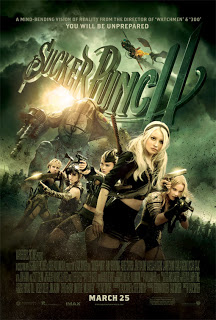 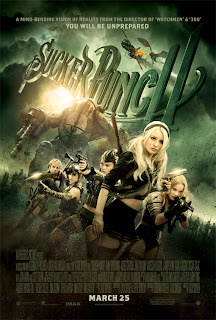 After getting known for his remake of Dawn of the Dead and adaptations of the graphic novels 300 and Watchmen, Zach Snyder comes out with his first original story (which still looks like it could have come from a graphic novel).

The film has a (literally) layered story about a young woman, nicknamed Babydoll, who is (somewhat falsely) sent to an insane asylum and nearly instantly reimagines herself as a prisoner in a brothel instead.  She and her fellow inmates then go on quest to retrieve the items needed to make their escape, each mission realized through an imagined action sequence.

I thought the film was pretty good from an entertainment standpoint, however the actual story of the film just seemed like a way to string the individual action sequences together.  One thing I did like is how the action sequences in the film were set to reworked versions of classic songs, such as “White Rabbit” by Jefferson Airplane and “Tomorrow Never Knows” by The Beatles.  The film’s almost a musical in that sense.

Overall, I thought that the film was pretty entertaining (and was also a joy to watch in IMAX).