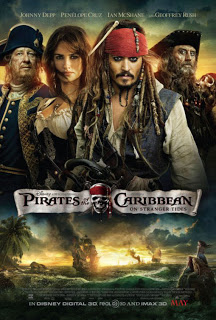 Out of all the films based on Disney theme park rides to come out last decade (as least three rides got adaptations), Pirates of the Caribbean is the only to get turned into a successful franchise.

Technically, this is the fourth film in the series.  However, it can also be said that this film features a new storyline, after the conclusion of the original story arc in the previous three films.

Johnny Depp is back as Captain Jack Sparrow and this time he is on a voyage to find the mythical fountain youth.  Geoffrey Rush also returns as Sparrow’s old nemesis Hector Barbossa, with Penelope Cruz and Ian McShane joining the cast, the latter playing the fearsome pirate Blackbeard.

I have to say that I found the film to be fairly enjoyable, even though the series no longer has the spark that the original film had eight years ago.  I do have to say that I sort of missed the inclusion of Orlando Bloom and Keira Knightley, their storyline having concluded in the last film.  The film does try to add a romantic side-plot, but it seems a bit tacked on and (without spoiling too much) reminds me too much of a certain Tom Hanks film from the 1980s.

Penelope Cruz is more antagonistic female lead than Knightly was and throughout the film she has a major love/hate relationship with Sparrow (with a little more emphasis on the hate).  Ian McShane was fairly decent as Blackbeard.  He had some weird, boat controlling, supernatural powers that weren’t really explained too much in the film, but perhaps that’s for another film.

Overall, while it’s not as good as the previous films, this was still a decent adventure (with some good 3D effects to boot).