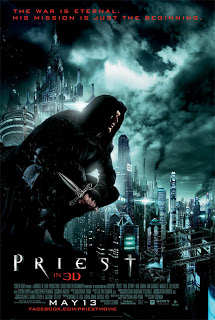 Priest is the second religion-based action/horror collaboration in a row between director Scott Stewart and star Paul Bettany.  I thought that, their previous film, Legion had a campy glee to it, which made it an enjoyable film.

I can’t really say the same about this film, which takes place in a futuristic society where the church has totalitarian rule and priests hunt vampires.  Well, calling the creatures “vampires” is a bit of stretch.  To me, they looked more like the demons from the videogame Doom.

I thought that the film was OK, but it seemed a lot more generic than Legion was.  Also, I was less than impressed with the 3D effects (or lack there-of) in the film.  I think the best aspect of the film was Karl Urban as the main villain and he probably should have received more screen time.

Overall, this is not a film I’d rush to see again anytime soon.