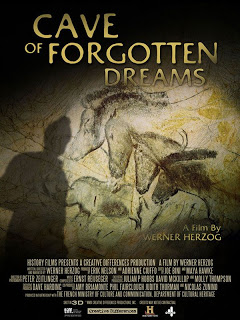 Werner Herzog is definitely one of the most unique directors around today.  In a career spanning nearly 40 years, he successfully managed to split between doing fictional films and documentaries.

This film features the exploration of a cave, which was discovered in France in 1994, that featured the oldest cave paintings ever discovered, dating back 30,000 years.  The use of 3D cinematography brings the cave to life, not only by added depth, but by showing how the paintings utilize the contours of the cave walls.  In an age where 3D is becoming overused, it’s nice to see a film that uses it in a careful and specific manner.  It’s definitely quite impressive.

The film is at it’s best when it features shots inside the cave.  Indeed, the most hypnotic part of the film comes towards the end when there is a long sequence of nothing but a tour of the cave, accompanied only by the film’s violin and flute-driven score.

Also enjoyable is Herzog’s narration of the film, in which he tries to contemplate what life was like in the cave.  Typical with Herzog, the narration is sometimes a bit odd (a scene towards the end involving albino crocodiles comes to mind), but all this does is add to the charm.

Overall, I thought the film was a quite enjoyable documentary, with one of the best uses of 3D cinematography that I have ever seen.  I sure that even if 3D stops being used in mainstream films, that it could find some unique uses in documentary films.