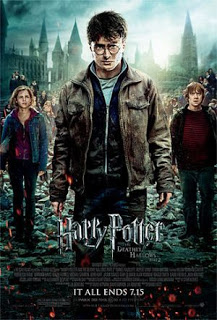 A decade of Harry Potter films ends with this very climatic final installment of the series.  Since this is the second half of a two-part story, the action picks up pretty quickly and it is definitely the most action-packed film in the entire series.

After being absent for Part 1, the action returns to Hogwarts, which is the site of a battle that makes up a good portion of the film.  There are definitely a lot of casualties in this film and descriptions of the film being more akin to a war film were pretty spot on.

Then of course there is the final showdown between Harry Potter and the evil Lord Voldemort.  I definitely have to say that it was an exciting climax that even allowed some of the film’s secondary characters to shine in ways that sure pleased the crowd at the midnight screening I attended.

All and all, I though this was a great conclusion to the series.  I almost would like to watch both parts back-to-end someday in order to get the full experience.  However, I can confidently say that the series went out with a bang.