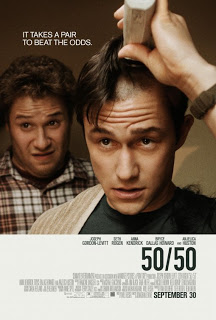 You wouldn’t really expect cancer to be something that you can laugh at, however 50/50 does manage to find humour in a possibly dire situation – for the first half of the film at least.

The film is about the attempts of a young man (played by Joseph Gordon-Levitt) to cope with his diagnosis of a rare form of cancer, in which he has only a 50% chance of surviving.  Seth Rogen play his best friend, and while Rogen is his usually goofy (and foul-mouthed) self, he does show his dramatic chops later on in the film.

While quite hilarious in the early half, the drama takes centre-stage in the latter half.  Overall, it was quite touching film about beating the odds.