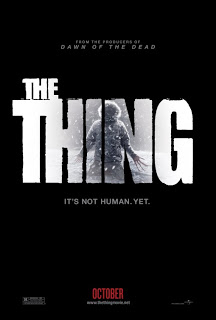 The Thing is supposed to a prequel to the 1982 John Carpenter sic-fi/horror classic, rather than a remake.  This is apparent early on in the film, where a group of scientists on a Norwegian base in Antarctica discover the alien creature buried in the ice.  However, the film begins to move really close to remake territory as the creature comes to life and the terror truly begins.  In fact, other than the prequel scenes (which includes a tie-in scene during the credits, which most people will likely leave the theatre before it shows), the story of the film is quite close to Carpenter’s film, especially involving the climax.

To those unfamiliar with The Thing, the creature is a shape-shifting alien that is able to take the form of anyone it kills.  Part of the suspense involves wondering who on the base is still human.  In fact, the most suspenseful scene of this film involves trying to determine who “the thing” has claimed.

John Carpenter’s film is noted for it’s very grotesque stop-motion transformation scenes, as human hosts turn alien.  The new film uses a combination of CGI and animatronics for the creatures.  Not sure where one ended and the other began, but the CGI transformations are laughable in how fake they look (partially due to the uncanny valley in the host’s face).  I can watch the transformations from Carpenter’s film and, while the stop motion looks a bit dated, it is still quite horrifying.  The CGI in this film? Not so much.

As for the cast, Mary Elizabeth Winstead leads the cast as one of the few American scientists on the base (a change from the original, which had absolutely no female characters).  Joel Edgerton (who I like to call Sam Worthington light – if there’s such a thing) takes the male lead in a role that is somewhat similar to Kurt Russell’s from the original.  Rounding out the characters is Danish actor Ulrich Thomsen as the lead scientist and Eric Christian Olsen as his assistant.  Many of the other characters, most played by actual Norwegians, don’t really seem worth mentioning, since they seem to be pretty much only there to be fodder for the creature.

Overall, the film is a semi-decent “requel.” When it comes down to it, I’ll probably prefer Carpenter’s film to this one, but this film still offered some decent thrills.