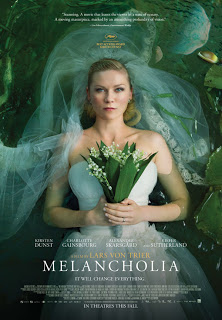 Melancholia was without a doubt one of the most bleak and depressing films I have ever seen.  I guess that’s not too much of a surprise, considering the fact that the film was directed by Lars Von Trier, who isn’t really known for making happy-go-lucky films.

The story is split into two parts, with each part focusing on one of two sisters (played by Kirsten Dunst and Charlotte Gainsbourg).  The first part, taking place at the wedding reception of Dunst’s character, is actually the more “normal” of the two, even though there are some dark undertones that come to play in the more bleak second half.

Despite me leaving the theatre a bit shaken, I thought that the film was very well done and that the performances by Dunst and Gainsbourg were quite good.

I recommend the film, but you may need a hug afterwards.