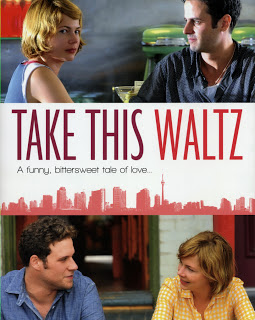 For my final film of Canada’s Top Ten, I saw this quirky romantic comedy directed by Sarah Polley.  One thing that stands out for this film right away is that even though it’s a Canadian film that takes place in Toronto, it features a very well-known cast of both Canadian and American actors, including Michelle Williams, Seth Rogen, Luke Kirby, and Sarah Silverman.

The film centres around a 20-something married woman named Margot (Williams), who lives a happy, yet mundane, life with her husband Lou (Rogen).  On a trip to Nova Scotia, she meets the suave Daniel (Kirby), who happens to be her neighbour.  Margot begins to believe that Daniel fills a void that is missing in her life with Lou and so begins a love triangle of sorts and Margot and Daniel develop feelings for each other, with Lou being oblivious to his wife’s infidelity.

The growing romance between Margot and Daniel is at the centre of the plot of the film and I have to admit that it was a difficult to watch.  While, you can understand why Margot wants an alternate to Lou (he seems more interested in his cooking than her), you still end up feeling sorry for him.  It helps that Seth Rogen gives a subdued performance for Lou, making him a lovable, yet somewhat naive, schlub.  Luke Kirby’s performance as Daniel was just as multifaceted.  For much of the movie, I found myself hating him for openly flirting with a married woman, however at the same time he initially didn’t seem to have any real desire to be a home-wrecker.

That brings us back to Michelle Williams’ performance as Margot, who is a character that doesn’t know a good thing when she has it.   Her character, and her desire to fill a void in her life that probably isn’t even really there, is what I gathered to be the true meaning of this film.  She ends up being the least sympathetic character of the film, even though you some somewhat pity her at the end.

Overall, Take This Waltz was a quite interesting character study.