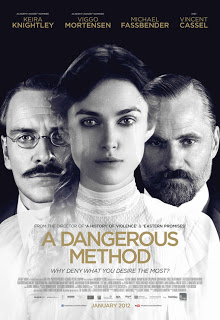 I’m started to head into the cream of the crop of the Canada’s Top Ten selection.  A Dangerous Method is of course the latest film by David Cronenberg.  The very fact that the film is directed Cronenberg might affect the opinions of some from an auteuristic point of view.  On it’s the own, I thought that the film was a fairly decent historic drama about the early days of psychoanalysis.  However, most people have come to expect a certain type of film from Cronenberg and A Dangerous Method is not it.

This is a very talky film, with much of the plot made up of various conversations.  However, these conversations, mostly between Carl Jung (Michael Fassbender) and Sigmund Freud (Viggo Mortensen) were quite intriguing.  It was interesting watch them progress from professional colleagues, to friends, to rivals with differing opinions on psychoanalysis (essentially Jung wanted to include religion, Freud did not).

Somewhat less interesting is the romantic plot between Jung and former patient (and later psychoanalyst herself) Sabina Spielrein (Keira Knightley).  While this section of this film (and its use of sexual spanking) is a bit more up Cronenberg’s ally, it was an overall distracting from what I was truly interested it – that being the relationship between Jung and Freud.  I also couldn’t help but feel that Knightly was over-acting somewhat in early scenes depicting Spielrein’s hysteria.

Also worth noting was a very short, but memorable, performance by Vincent Cassel as fellow psychoanalyst Otto Gross.  He stood out so much in the few minutes he was in the film, I would almost watch an entire film with Cassel playing Gross.
Overall, while the film not really what you would expect from David Cronenberg, it was a fairly interesting look into the world of psychoanalysis.
8/10