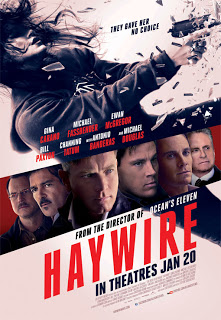 Steven Soderbergh isn’t often known for directing action films and, as it turns out, Haywire isn’t your usual action film.  Storywise, this type of film, about a black ops agent who has been betrayed, has been told many time before and film is actually bit stylistically similar to the Bourne films.

The film stars former MMA fighter Gina Carano and features many well-choreographed fight scenes.  An interesting thing about these scenes is that they are not scored, so the only sounds that’s heard are the kicks and punches during the fight.  As such, it allows the audience to respond in a very natural manner.

Overall, I have to say that Haywire was probably one of the most enjoyable January releases I’ve seen.