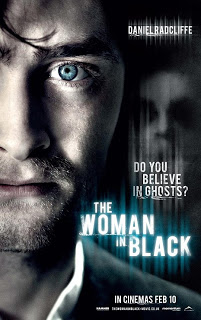 Tonight I saw and advance screening of this new ghost story staring Daniel Radcliffe, which has its regular release next week.  This is Radcliffe’s first post-Harry Potter film and it is definitely a different type of role for him, being a gothic horror film.

Radcliffe plays a lawyer, who comes to a small English town to look over the paperwork in an old mansion.  The mansion is haunted by a banshee-like spirit, who kills a child in town whenever she is seen.

It’s definitely a spooky subject matter, though I thought the film had a very slow pace.  I thought that the early appearances of the ghost wasn’t all that scary and I thought the scares peaked in the second act during an extended sequence when the mansion becomes akin to haunted fun house in an amusement park.

Overall, I thought that The Woman in Black was decent enough film.  It’s not the scariest ghost story I’ve seen, but it had its moments.