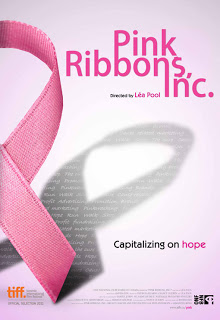 While the focus of this film is Breast Cancer charities, the question it asks is universal: When you give money to a charity, does it truly go to helping the cause?

Breast Cancer awareness (and its accompanying Pink Ribbon campaign) is probably the most mainstream of all charities and it’s also the most commercialized.  I would be surprised if anyone went out to see this documentary and wasn’t absolutely disgusted with how Breast Cancer awareness is literally sold to the world ( the film features commercials from everything from Ford to Kentucky Fried Chicken).

The film repeatedly contrasts Breast Cancer walks and its display of smiling dancing women dressed in pink with a group of women who have stage-4 Breast Cancer (the terminal stage) and get next to no support from the mainstream Breast Cancer community, since they are all expected to die (and hence cannot be labeled “survivors”).

The film also goes into how these charities seem to be all about curing the decease after it happens, instead of finding ways to prevent cancer in the first place.  In addition, many corporate sponsors of Breast Cancer charities are also known for developing products with carcinogenic agents.

Even the Pink Ribbon itself is distorted from the original “pink ribbon” campaign (which used a more salmon-colour ribbon).

Overall, I thought that Pink Ribbons, Inc is an excellent documentary that raises some intriguing questions about Breast Cancer charities.