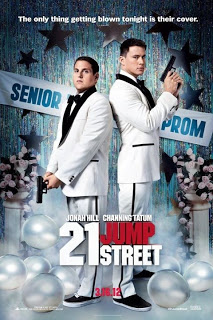 I consider Jonah Hill to be quite a funny actor when he is cast in the right type of movie.  21 Jump Street is not the right type of movie (don’t get me started on co-star Channing Tatum).  You can tell when an action-comedy isn’t really working when you are able to keep a straight face for the bulk of the film (though I do admit that there are a few funny scenes in the film).

There are some things in the film that worked.  I love the clever, fourth wall-breaking, dialogue early on that mocks the fact that this is modern remake of the 1980s TV show.  I also quite enjoyed the funny cameo by, the show’s star, Johnny Depp.

However, when it is all said and done, 21 Jump Street was a quite forgettable film.