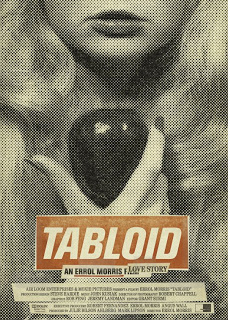 They often say that truth is stranger than fiction.  That is never more apparent than in Errol Morris’ documentary Tabloid, which takes a look at tabloid culture through the eyes of a former beauty queen, whose life was literally torn apart by tabloids.

The story that kicks off this saga is strange enough – the film’s subject Joyce McKinney falls in love with a Mormon man and plans to marry him.  He is apparently brainwashed by the Mormon church into rejecting her and the next thing she knows, she is arrested for apparently kidnapping and raping him.

The story only gets stranger from there, since this whole event puts McKinney in the radar of the tabloids, who reveal some skeletons from her past, which may or may not have been fabricated.  If things weren’t strange enough, there is another twist late in the film, which I wouldn’t dare spoil.

The film features plenty of Errol Morris’ trademark Interrotron interviews.  While the bulk of the interviews are with McKinney, many of the other individuals involved in this saga were also interviewed.  The interesting thing with these interviews is that each person was sure that they were telling the “true” story.  The film was edited in a way that you were obviously meant to sympathize with McKinney, though it was also obvious that perhaps she was somewhat obsessed and delusional.  In fact, the most trustworthy interviews came from the very reporters that covered McKinney’s saga in the newspapers (even if they apparently didn’t have all the facts straight).

Tabloid was definitely an interesting film on many levels.  Not only is the story so strange that it can only be true, but it’s also quite sad that McKinney got so hounded by the paparazzi, that she eventually became agoraphobic. I thought that it was quite an excellent film.