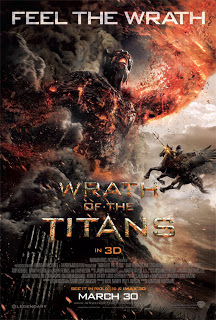 I don’t know where to begin when it comes to Wrath of the Titans.  I actually somewhat enjoyed the previous film Clash of the Titans (even though I decided to give it half a point less in my rating).  That film still ended up being somewhat watchable, despite being one of the first (of many) victims of post-converted 3D.

I would say that Wrath of the Titans is also somewhat watchable, but my overall enjoyment has greatly diminished.  It’s a very formulaic sequel and I actually found myself bored for much of the film.  There are only like four major battles in the film, with only the final one against the fire monster Kronos being somewhat interesting (and the best use of 3D in the film).

I also don’t know if it was a problem with the IMAX conversion or the film itself, but the colour was very faded and murky for much of the film. It was definitely not very pretty to look at.

Overall, I would consider Wrath of the Titans to be a somewhat forgettable film.