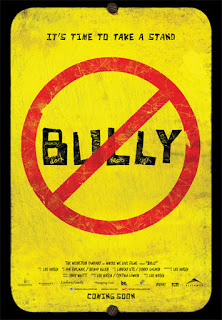 “Sticks and Stones may Break My Bones, but Names Will Never Hurt Me”

That’s a phrase that was taught to me when I was in elementary school as a response to bullying, even though the belief that names don’t hurt isn’t exactly accurate.  I was bullied all throughout elementary and high school and it was definitely a tough experience for me.  I often consider my final year of high school the most memorable and part of the reason for that is that most or all of the kids who bullied me graduated the year before (because they were in college-level courses and didn’t take OAC like I did).

It is these memories from my youth that prompted me to go out and see Bully, a documentary which aims to “take a stand” against the problem of bullying in schools.  My response to the final product is somewhat mixed.

I guess I will start by talking about the ratings controversy that plagued this film in the United States.  My response to that controversy, in which the film received an R rating, is that the MPAA is broken and does not put context into consideration.  After seeing the film, I am 100% sure that the MPAA were unfounded in giving the film that rating.  While it’s true that there is bad language in the film, but I don’t believe it’s bad enough to warrant an R rating (I only noticed 1 or 2 f-words).

As for the film itself?  I definitely found myself sympathizing with the stories shown on screen.  One of the lead kids documented in the movie, a bespeckled kid, who I suspect has some sort of Autism Spectrum Disorder, is one I can greatly relate with, since he is depicted as a loner, who often just lets the bullying happen.  He is also a subject of a scene, in which a nasty case of bullying is caught on camera.  While this does raise the issue about how much influence the filmmakers had in shooting this scene, I happened to read an except from director Lee Hirsch in Cineplex Magazine, who said that the bullies seemed to have no fear of the consequences, despite being filmed, and they might have also thought that the Canon 5D Mark II camera Hirsch shot with was a still camera.

If there is one thing that this documentary seems to expose it’s that the authority figures may say that they will make an effort to stop bullying, but in truth are quite apathetic and naive.  There is one authority figure in particular shown in the film, who received loud responses in the theatre for her actions, which either blamed the bullied kid or tried to shrug the bullying off as “kids will be kids.”

Of course, the film is making it seem that bullying can be stopped just by taking a stand.  I’m sure this may help raise awareness and stop the apathy of teachers, but I don’t think that bullying is something that can be easily stopped.  Since Lee Hirsch takes a mostly cinéma vérité approach with this film and follows a few select individuals, we never get the full picture.  We get plenty of descriptions of what the bullies do, however the film does not go into why bullies do what they do.  The problem of bullying is definitely a complicated issue that has no quick fixes.

Overall, I will say that Bully is competent for what it is – a “fly on the wall” look at a group of bullied kids and their parents.  In the long run, I don’t think the film will do too much to actually stop bullying, but it does put a face to the countless bullying victims out there.