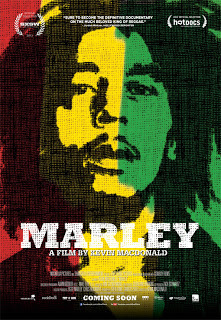 As you could probably tell from the title, Marley is a documentary about the life and career of reggae superstar Bob Marley.  With a running time of 2hr24min, the film will definitely tell you all that you would ever want to know about Marley.

In some ways, I feel the documentary was a bit too long, especially when it comes to the first hour.  I’m a bit sad to say that I found the descriptions of Marley’s early life in Jamaica to be a bit on the boring side and it wasn’t until the film went full throttle into Marley’s musical career (and began showing performance footage) that I began to get interested.

Despite my issues about the film, this is probably as good a document about Marley as there could be.  The film is built entirely around talking head interviews with his bandmates and family members.  The film also makes use of archived interview clips with Marley at various stages of the film (I should also note that subtitles are often used because of the thick Jamaican accents).

Overall, I would say that Marley is a decent music bio that covers Bob Marley’s entire life.